In the “golden” years of industrialization of the late 19th and early 20th centuries the establishment of factories was viewed as a symbol of progress. Communities, eager to attract manufacturers, billed themselves as prime locations, offering irresistible amounts of natural resources, skilled workers, and future opportunities. Factories that were already in place were viewed with pride, as symbols of a community’s economic and cultural standing in the world. Factory postcards were not uncommon. 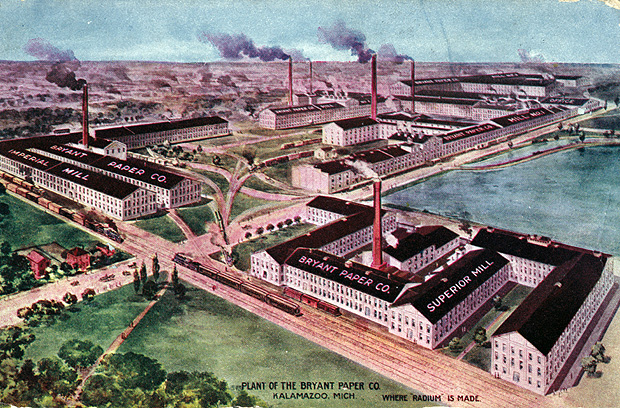 I’ve always been fond of this postcard view of the Bryant Paper Company, so much so that it serves as the header for this site. Although an artistic representation, the postcard image is a fairly accurate depiction of the mill itself. The buildings are shown much as they would have appeared in the early 20th century. But beyond the architecture the realism diminishes.

When viewed critically one has to conclude that the Bryant Paper Mill, or at least the area around it, never quite looked as good as it does in this image. The setting is almost park-like. Trees and grass are green and lush, showing no ill-effects of the chemicals or smoke from the neighboring paper mill. The Bryant Mill pond, the eventual environmental clean-up of which was a nightmare, is shown as a reflecting pool. The sky is blue, despite the blow spewing from the many stacks.

The Bryant Paper Company as a rubble-strewn lot in 2006.

The Bryant Paper Mill is shown as harmoniously co-existing with its urban and natural environment. With the benefit of hindsight we now know that this was not exactly the case. Industrialization had many benefits, but it also had downsides that such romantic imagery either downplays or laughably ignores. Nearly a century later the imagery could not be more different. Paper mills such as Bryant, even vacant, were viewed as detrimental to their urban and natural neighbors and arguments vastly different than those made a century ago have been made in their name. This time the removal of old factories has become a symbol of progress. It is the why and how of this change, the end of this industrial romance, that is one of the things I find the most interesting as I attempt to document the changes to the paper-making landscape around me.