For much of the 20th century Kalamazoo, Michigan was known as the “Paper City.” The city of Kalamazoo and the surrounding region were to the paper industry what Detroit was to the auto industry. Mill operators took advantage of the region’s rivers and natural resources to construct a seemingly durable infrastructure of paper-making. However, as the century drew to a close, the mills began to consolidate and close. Today only a few mills remain, none of which are in Kalamazoo itself. What is left behind is an industrial legacy that has altered the built landscape of the region, highlighted by environmental contamination, and peppered with industrial ruins.

Paper mills were popular subjects for postcards and other materials promoting the Kalamazoo region. This card shows the Bryant Paper Mill.

The genesis for this site dates to 2001 when I first began to photograph the former Bryant Paper Mill in Kalamazoo. I continued to photograph and research the mill complex throughout its gradual demolition between 2004 and 2007. As the years went on I expanded the scope of my study to include the Kalamazoo Paper Company, the region’s first mill, the Kalamazoo Vegetable Parchment Company, a mill that established its own company town to house its workers, and the Mac Sim Bar Paper Company in Otsego, Michigan. 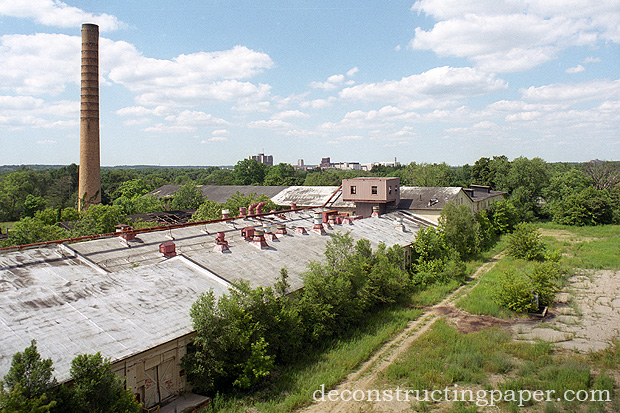 The Bryant Paper Mill just prior to demolition in 2004. It was these overgrown ruins that first attracted me to documenting the region's mills.

While there were many more mills that operated in the region, these four each have a unique story to tell, both as operational mills and as post-industrial ruins. Each helps shed light on the demise of paper-making in the Kalamazoo region and how the local communities have adjusted. It is my goal with this site to document, discuss, and inform on the changing post-industrial landscape as Kalamazoo faces a future beyond paper.