The earliest paper mill buildings found in the Kalamazoo region from 1866 into the early 20th century reflect the architectural trends of the 19th century textile mills of New England. They were built with thick load-bearing brick walls that supported the entire structure’s weight. The exteriors were typically painted white or a cream color to denote cleanliness. Unlike textile mills, paper mills were seldom over two-stories possibly owing to the sheer weight and size of equipment. Mill buildings over two-stories were usually warehouses. Roof lines were seldom flat, usually gabled with either wood or steel trusses. The windows, of which there were many, were tall and narrow segmental arches with wood sashes. This helped give the buildings a pleasing appearance.

The buff brick and segmental arched windows of this warehouse building at Mac Sim Bar are characteristic of late 19th and early 20th century paper mills.

However, the most characteristic feature of early paper mill design was the form. Mills were extremely long and extremely narrow structures. Mill complexes were often typically series of these long finger-like wings connected with linking passageways. This architectural form served two functions. First, the length was necessary in order to house the paper-making process which employed massive and extremely long machines. Second, the narrow width coupled with a large number of windows was necessary to bring in as much natural light as possible at a time when artificial lighting was poor. 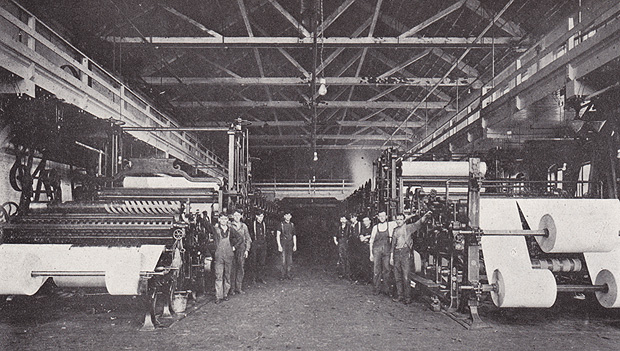 Mill structures of this type can be found at nearly every paper mill complex in the Kalamazoo region. The Bryant Paper Company and Plant #1 of the Kalamazoo Vegetable Parchment Company were especially fine examples.