The region’s first mill, the Kalamazoo Paper Company, was established in 1866. This first mill was located on Cork Street, the outskirts of the village of Kalamazoo at the time. Why did the mill get built at this location? The reasons had everything to do with the environment. Southwest Michigan put the mill near needed natural resources, such as wood. But more importantly, mill operators were drawn to the region’s waterways such as the Kalamazoo River and Portage Creek. 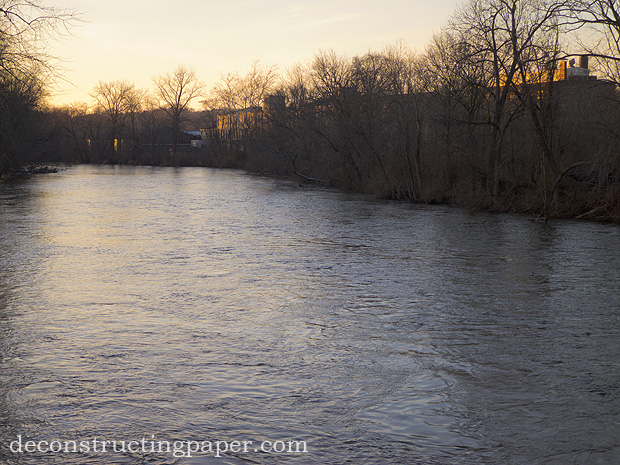 Access to clean water was the number one priority for paper manufacturing. Water was needed both for the production process as well as, in the early days, providing power to the mill. Early factories got their energy by installing turbines in the rivers, which then powered machinery via line-shafts. As the 19th century wore on, eventually water power gave way to steam power supplied by massive coal and oil boilers in power houses.

But even as power became less dependent upon rivers and more dependent upon fossil fuels, water was still the most important natural resource in paper making. It was used to in nearly every stage of the process, from cooking the pulp to running the sheets of paper through the paper machines.

The more clean the water, the better. Clean water resulted in more clean, whiter paper. As a result it was advantageous to build mills away from urban areas, where the water was dirty. Hence why the Kalamazoo Paper Company built their mill on the outskirts of Kalamazoo. When the river supply was not adequately clean enough it became necessary to construct water filtration plants, or to supplement the river water with water brought up from wells.

The water filtration plant at the Kalamazoo Vegetable Parchment Company, circa 1934.

In time the paper mills would have a vast impact on the local environment. The rivers from which they obtained much of their water supply became heavily polluted. The mills wound up leaving behind a legacy on the landscape that went beyond empty buildings.